Australian Soldiers In The Second World War (WW2): A Pictorial

The saga of the Second World War is dominated by the German, American, British, Russian and Japanese soldiers. The crucial role soldiers from Australia is often over looked. In the images below we see the Australian soldier in many theaters of the Armageddon. 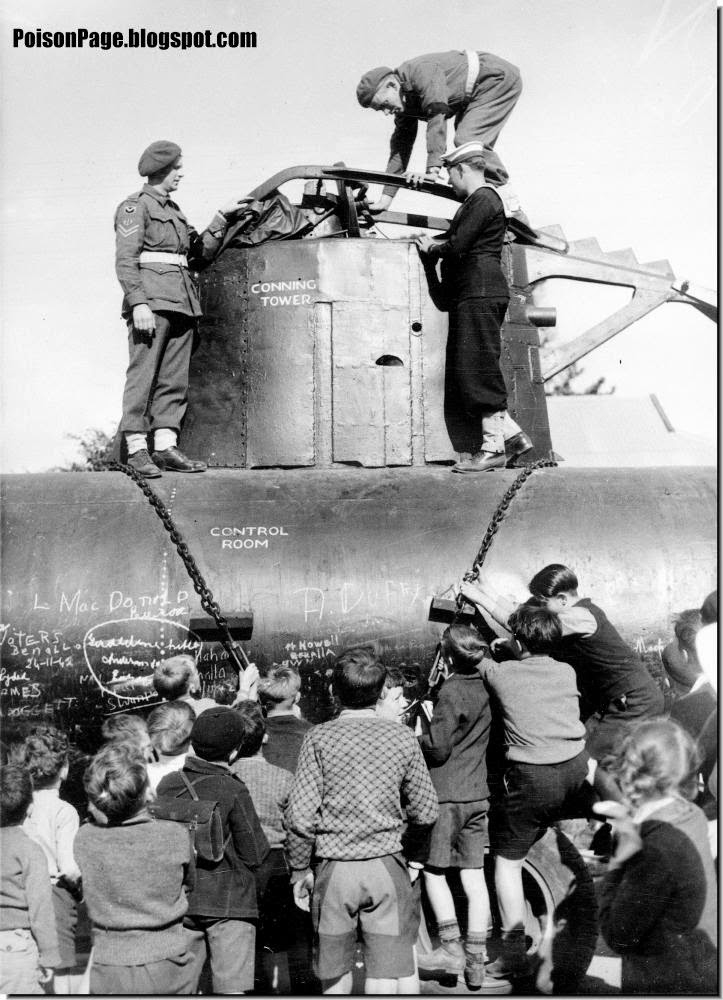 Australian soldiers examine Japanese submarines that were sunk in the Sydney Harbor in 1942.

On the night of May 31, 1942 three ultra-low class Japanese submarines  broke into the Sydney Harbour. In the harbor at the time were the American heavy cruiser "Chicago", the destroyer "Perkins' mother ship and destroyer" Dobbin ". Two of the 46-ton submarines were sunk, but the boat M24 released two torpedoes, one of which sank the ferry HMAS Kuttabul, killing 19 Australian sailors and two Englishmen. The second torpedo flew to the shore and did not explode.

The submarine M24 was destroyed by an American destroyer 5 kilometers from the coast. Two other submarines sunk during that attack were raised to the surface and are in display in the National War Museum. 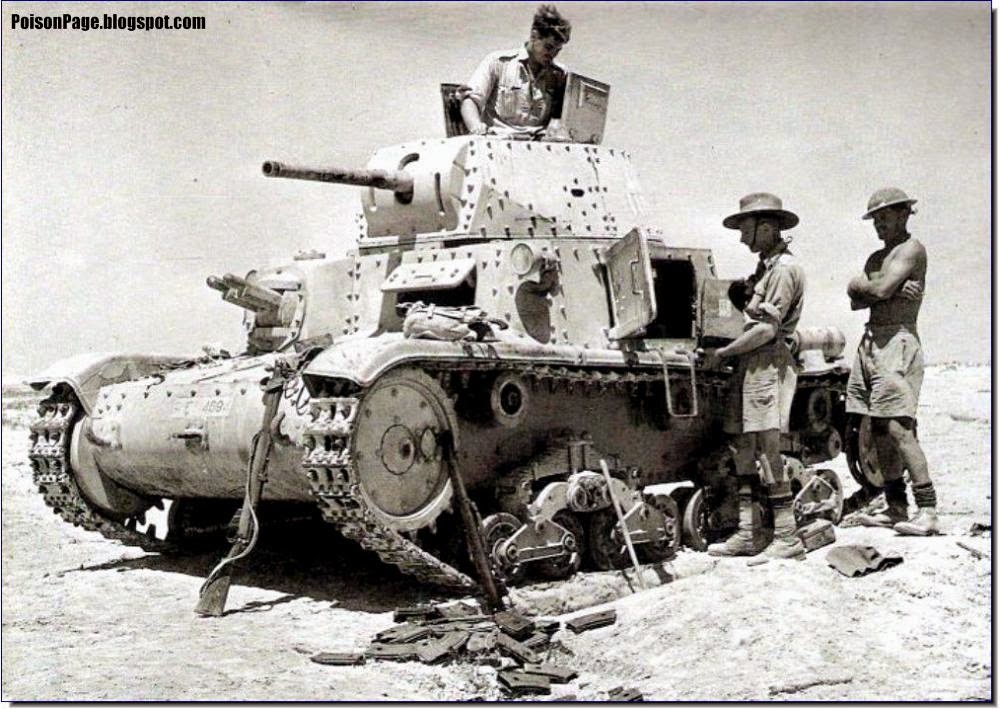 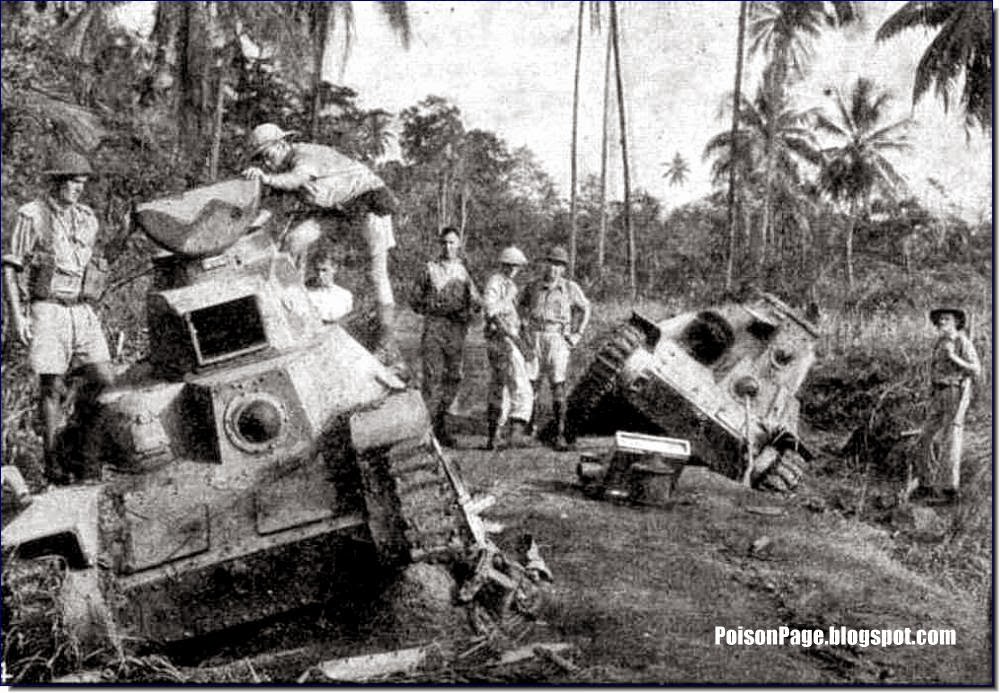 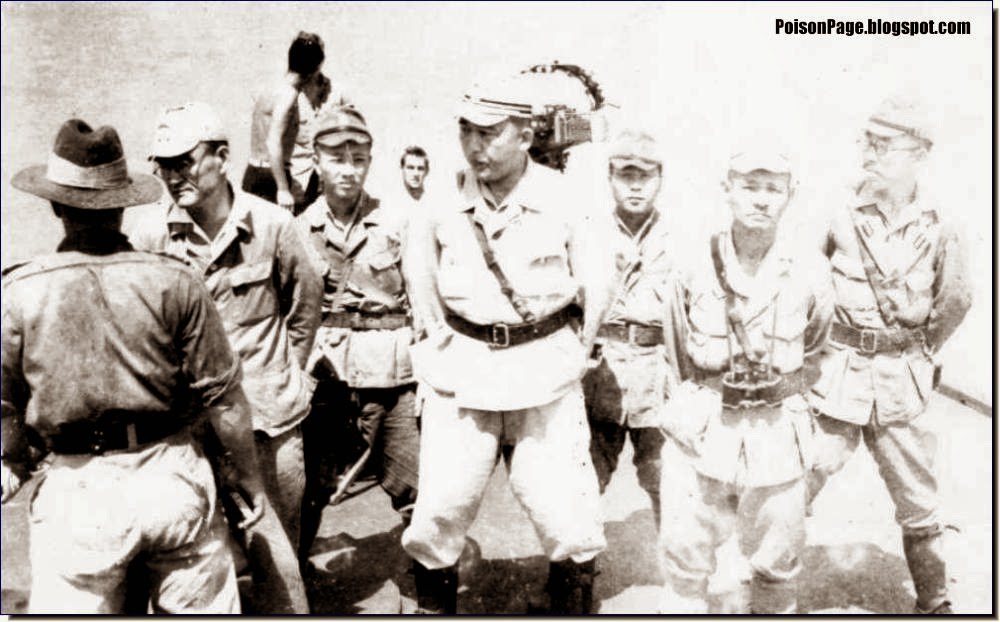 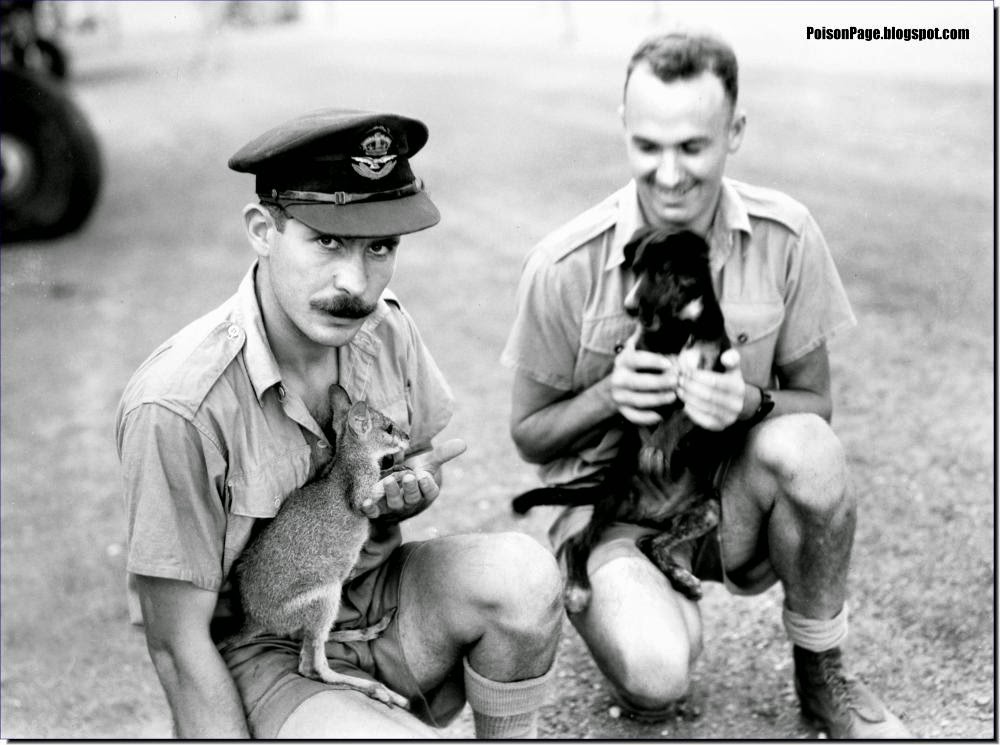 An Australian pilot with a baby Kangaroo 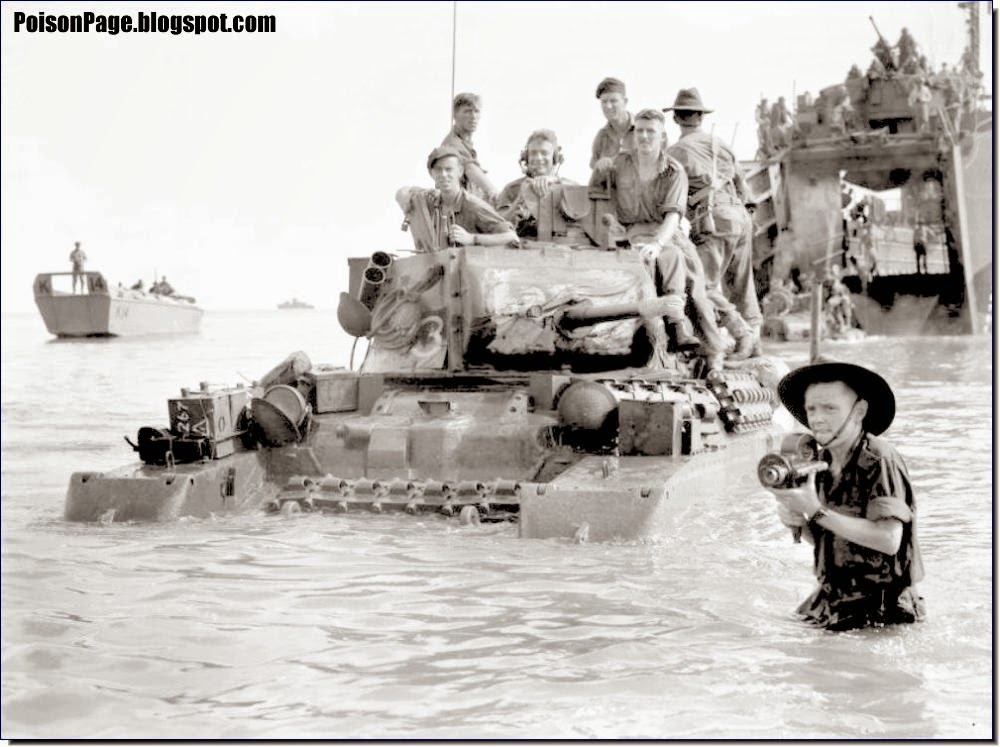 Australians land in the island of Labuan, North Borneo. 1945.

The Borneo campaign of 1945 was the last major Allied campaign in the South West Pacific. In a series of amphibious assaults between 1 May and 21 July, the Australian I Corps, under Lieutenant General Leslie Morshead, attacked Japanese forces occupying the island. Allied naval and air forces, centred on the US 7th Fleet under Admiral Thomas Kinkaid, the Australian First Tactical Air Force and the US Thirteenth Air Force, also played important roles in the campaign. The goals of this campaign were to capture Borneo's oilfields and Brunei Bay to support the US-led invasion of Japan and British-led liberation of Malaya which were planned to take place later in 1945. The Australian Government did not agree to MacArthur's proposal to extend the offensive to include the liberation of Java in July 1945, however, and its decision not to release the 6th Division for this operation contributed to it not going ahead.

The campaign opened on 1 May 1945 when the 26th Brigade Group landed on the small island of Tarakan off the east coast of Borneo to secure the island's airstrip as a base to support the planned landings at Brunei and Balikpapan. While it had been expected that it would take only a few weeks to secure Tarakan and re-open the airstrip, intensive fighting on the island lasted until 19 June and the airstrip was not opened until 28 June. As a result, the operation is generally considered to have not been worthwhile.

The next phase began on 10 June when the 9th Division conducted simultaneous assaults in north-west Labuan and on the coast of Brunei. While Brunei was quickly secured, the Japanese garrison on Labuan held out for over a week. After the Brunei Bay region was secured the 24th Brigade was landed in North Borneo and the 20th Brigade advanced along the western coast of Borneo south from Brunei. Both brigades rapidly advanced against weak Japanese resistance and most of north-west Borneo was liberated by the end of the war. During the campaign the 9th Division was assisted by indigenous fighters who were waging a guerrilla war against Japanese forces with the support of Australian special forces such as Z Special Unit. 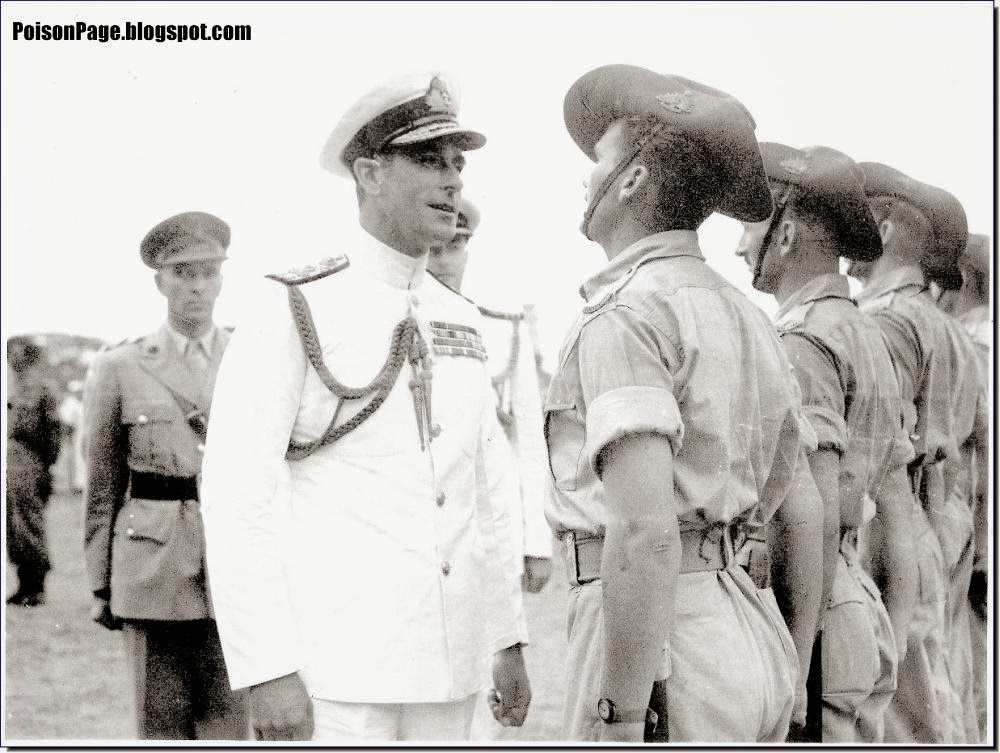 The initial supreme commander of the theatre was General Sir Archibald Wavell while head of the short-lived American-British-Dutch-Australian Command which was dissolved after the fall of Singapore and the Dutch East Indies. In August 1943, the Allies created the combined South East Asian Command, to assume overall strategic command of all air sea and land operations of all national contingents in the theatre. In August 1943, with the agreement of the Combined Chiefs of Staff, Winston Churchill appointed Admiral Lord Louis Mountbatten as Supreme Allied Commander South East Asia, a post he held until 1946. The American General Joseph Stilwell was the first deputy supreme Allied commander, as well as heading the US China Burma India Theater (CBI) command. 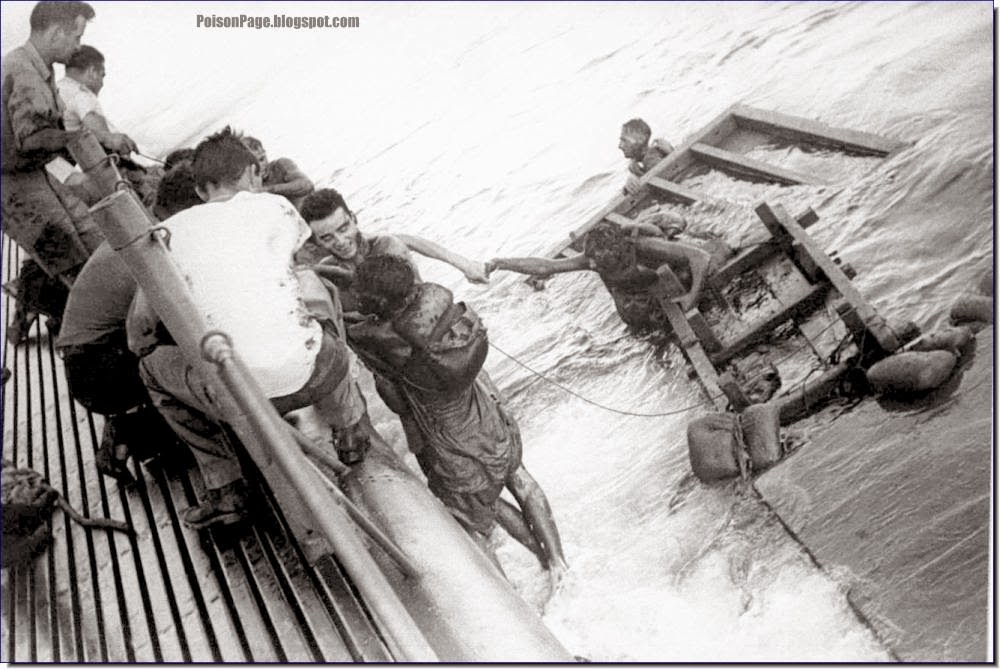 The Japanese transported prisoners of war great distances across their empire. The worst and most dangerous period in a prisoner’s life was travelling in captivity. Over-crowding, sickness, disease and the dangers posed by Allied submarines caused much stress and anxiety. Conditions on board these ships were severe: over a 1,000 prisoners might be crammed into spaces suitable for a few hundred and given little food, fresh water, or adequate sanitation facilities. Some journeys lasted just a few days, but the longest was a voyage from Singapore to Japan which took 70 days (this was the Rashin Maru, known to prisoners as the “Byoke Maru”, or sick ship). The prisoners of war called these transports “hellships”.

On the morning of 12 September 1944 the convoy was attacked by American submarines in the South China Sea. Rakuyō Maru was sunk by USS Sealion II and Kachidoki Maru by USS Pampanito. Prisoners able to evacuate the ships spent the following days in life rafts or clinging to wreckage in open water. About 150 Australian and British survivors were rescued by American submarines. A further 500 were picked up by Japanese destroyers and continued the journey to Japan. Those not rescued perished at sea. A total of 1,559 Australian and British prisoners of war were killed in the incident, all missing at sea (1,159 from Rakuyō Maru, 400 from Kachidoki Maru). The total number of Australians killed was 543. 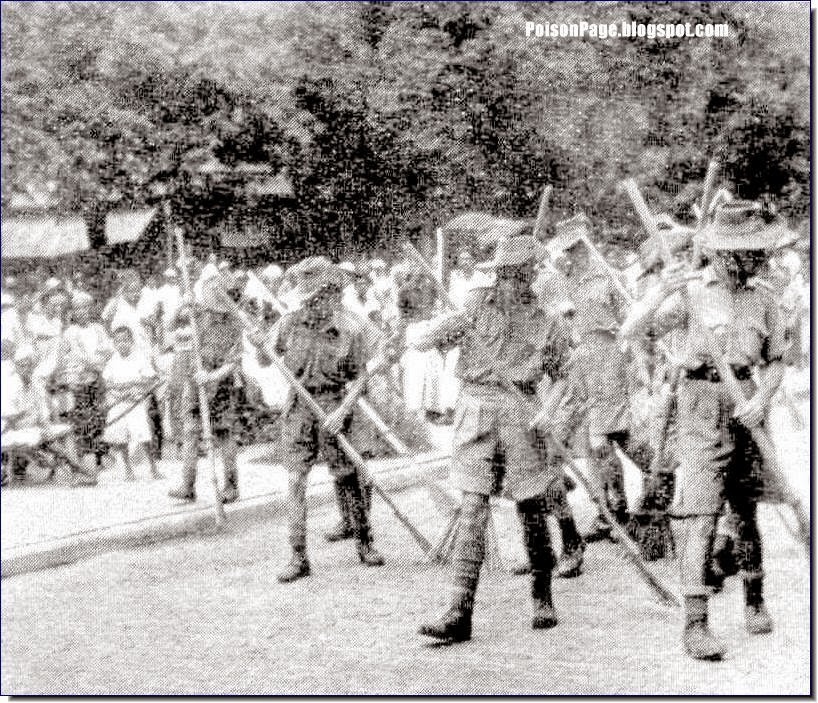 After Singapore fell the Japanese in order to humiliate the Allies made the Australian POW to sweep the streets as the locals watched. 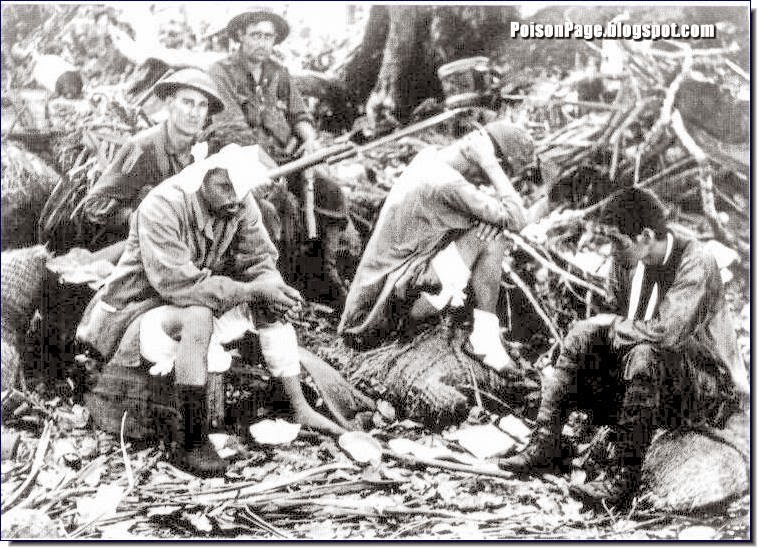 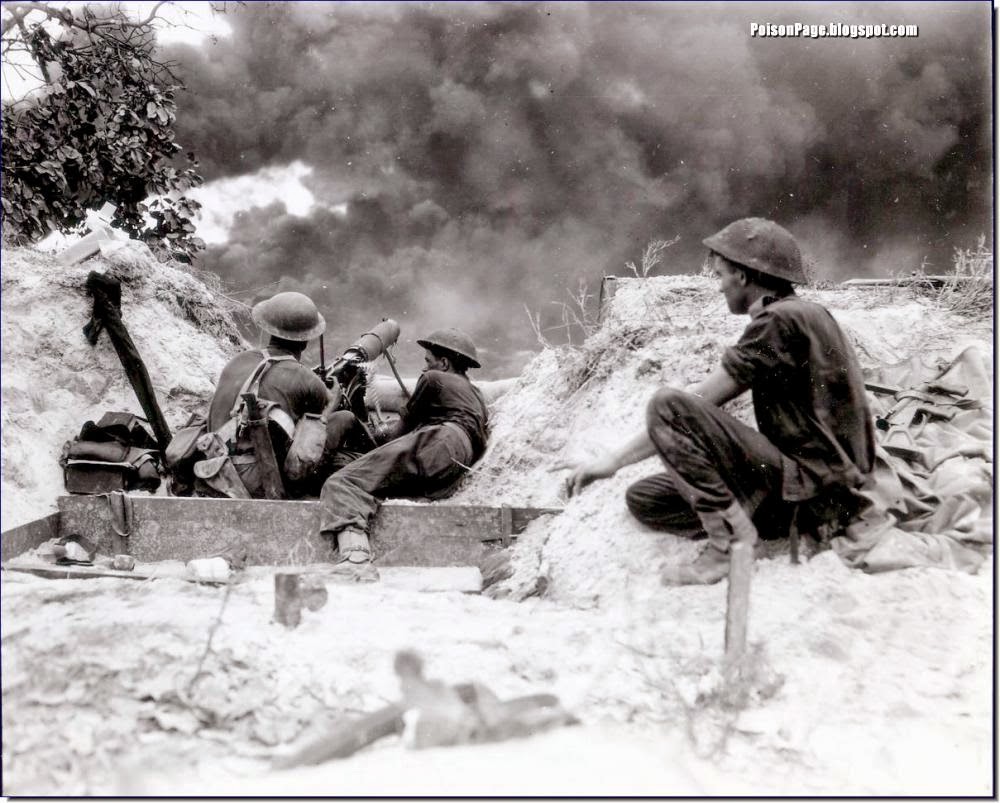 The Battle of Balikpapan was the concluding stage of the Operation Oboe. The landings took place on 1 July 1945. The Australian 7th Division, composed of the 18th, 21st and 25th Infantry Brigades, with KNIL troops, made an amphibious landing, codenamed Operation Oboe Two a few miles north of Balikpapan, on the island of Borneo. The landing had been preceded by heavy bombing and shelling by Australian and US air and naval forces. The Japanese were outnumbered and outgunned, but like the other battles of the Pacific War, many of them fought to the death.

Major operations had ceased by July 21. The 7th Division's casualties were significantly lighter than they had suffered in previous campaigns. The battle was one of the last to occur in World War II, beginning a few weeks before the bombing of Hiroshima and Nagasaki effectively ended the war. Japan surrendered while the Australians were combing the jungle for stragglers.

Following the surrender the three Brigades were committed to occupation duties until around February 1946. The 21st Brigade was detached to Makassar in the Celebes Islands to accept surrender of the Japanese forces, release POWs and maintain civil order. 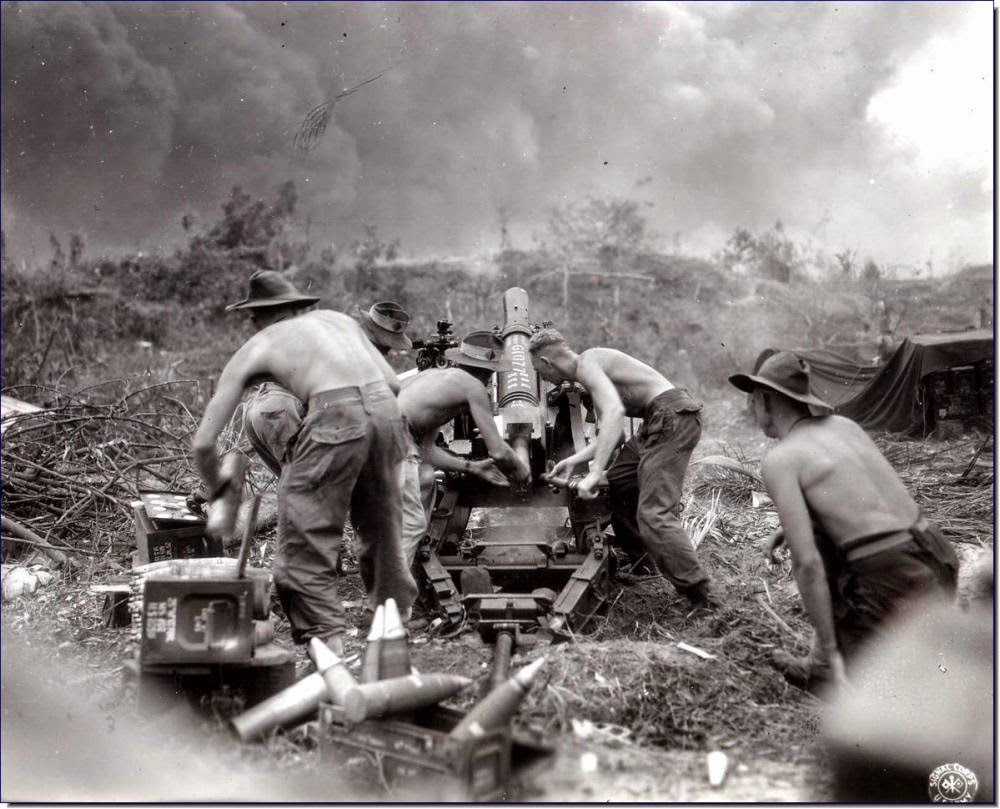 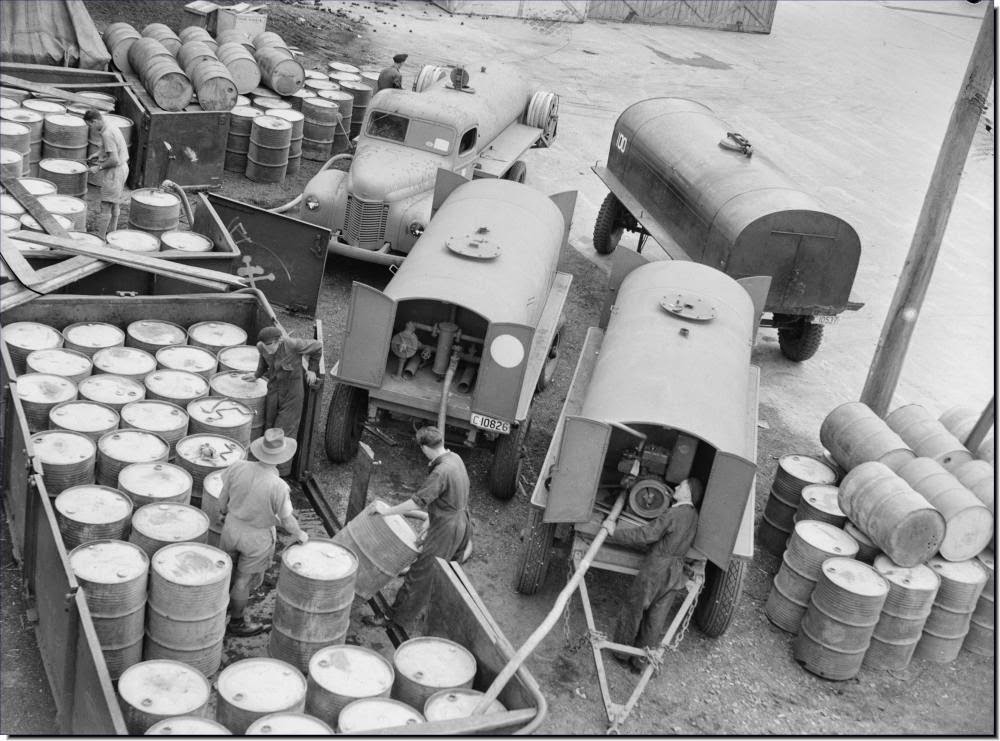 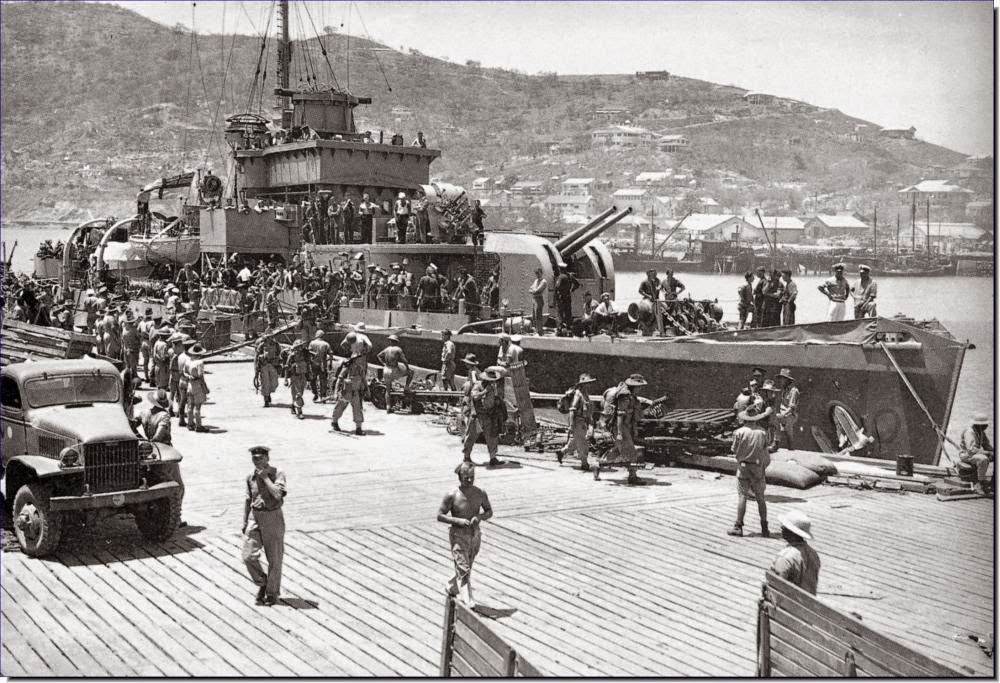 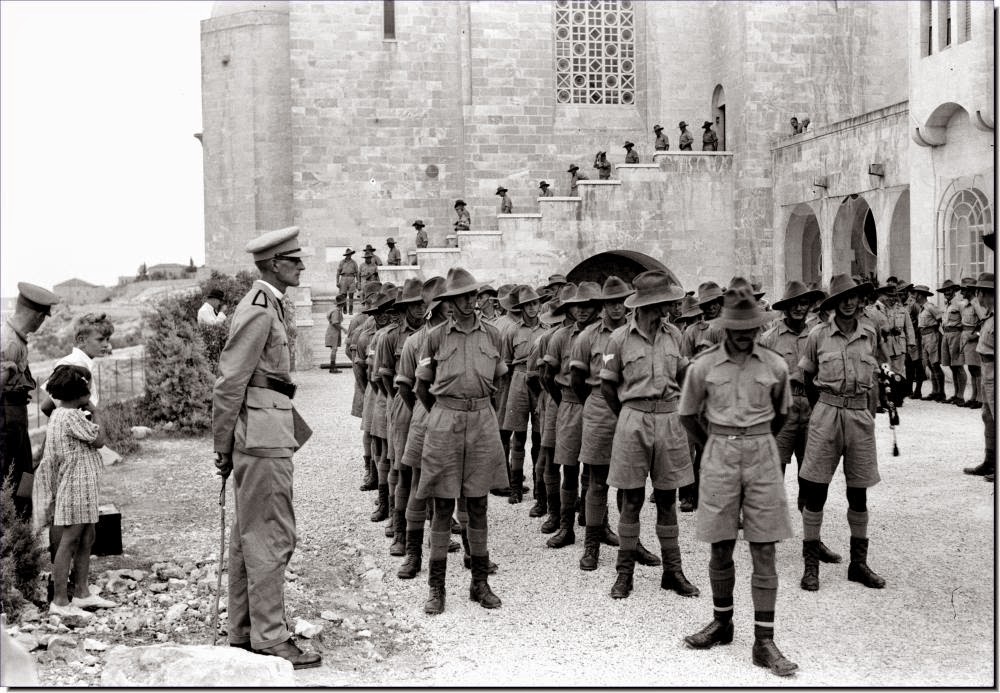 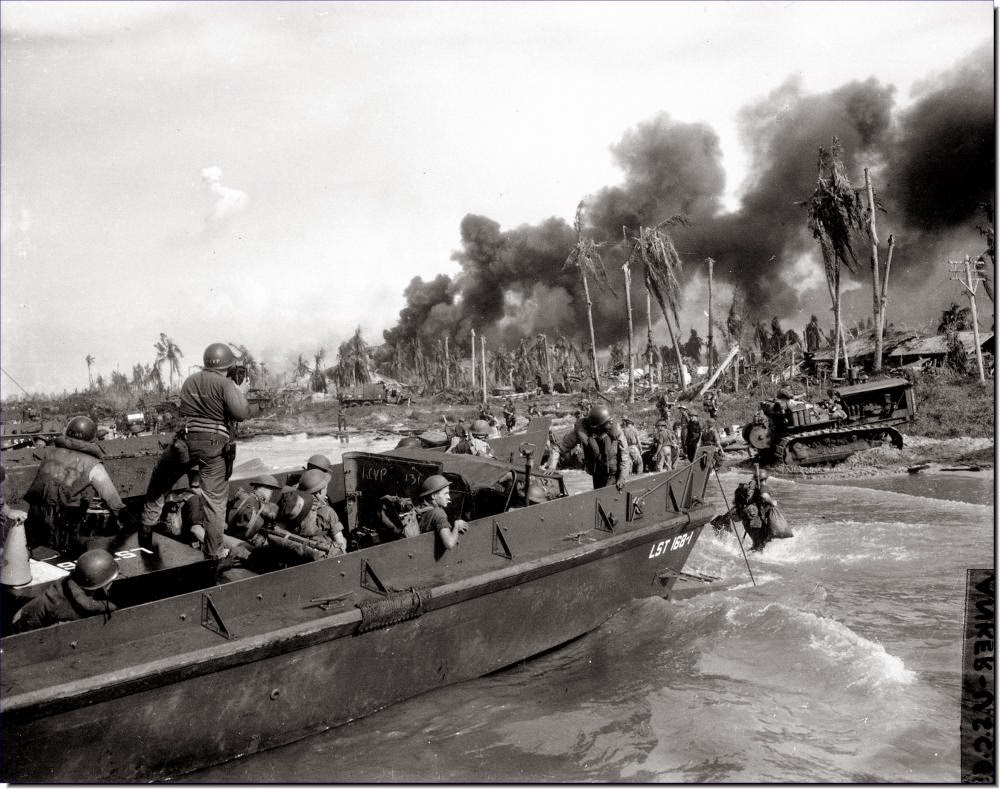 Australian soldiers land at Ballikapapan, Indonesia. July 1945 as an US soldier films. 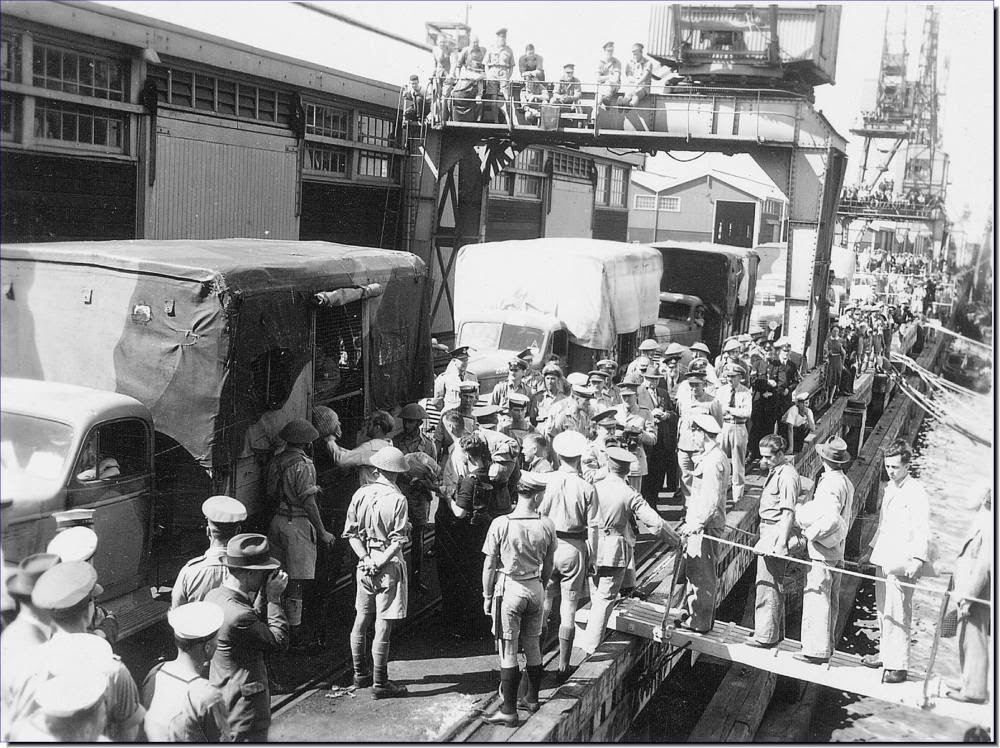 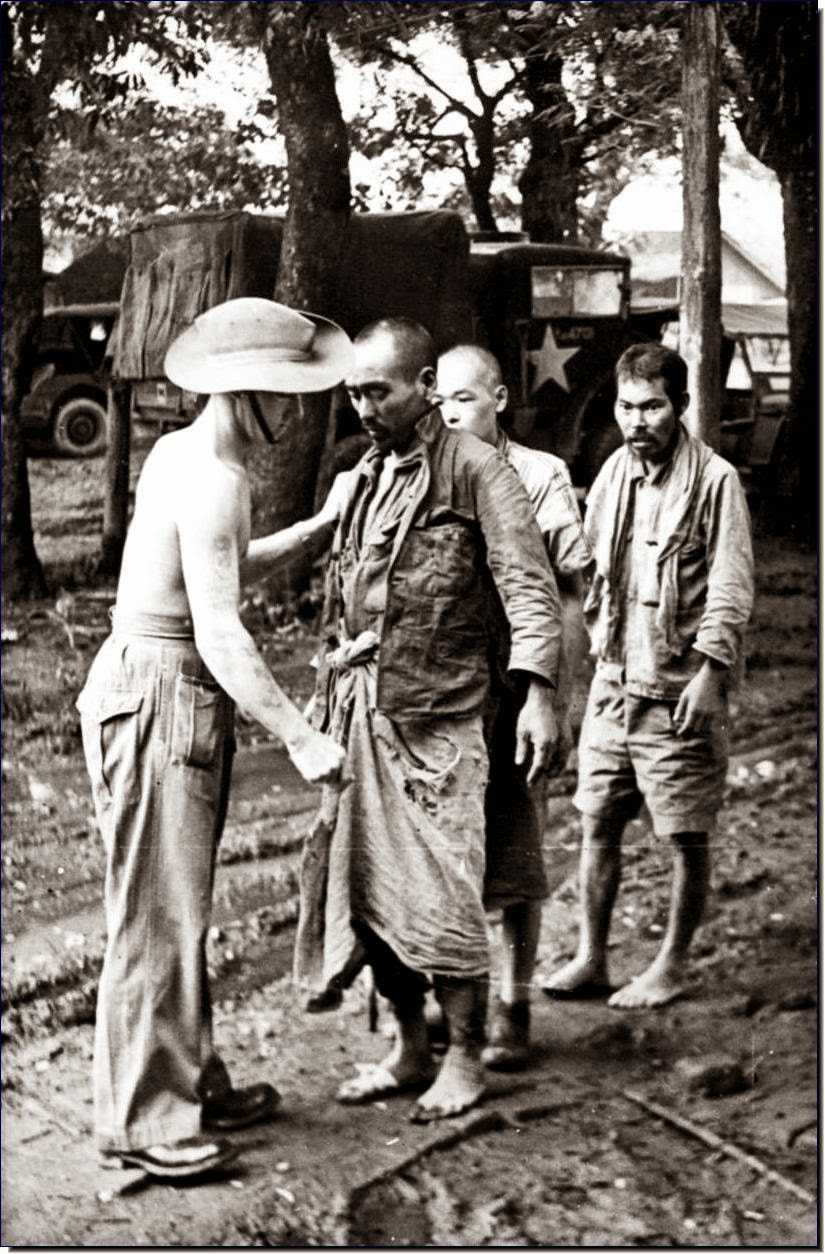